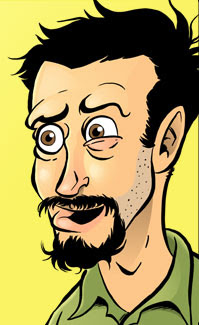 I gave the front page of my portfolio site a bit of a face lift today. I drew a new characiture of myself that looks way better than the old one. I wonder how many art jobs I lost because of that old one. I did a blog post a little while ago showing off a sketch I did of a prospective new characiture but I wound up drawing this one that looked way better, in my opinion. I also did a new logo which I hate less than the older one. You can see them both at home at jeffmorinart.com.
Posted by Jeff M at 10:51 AM No comments: 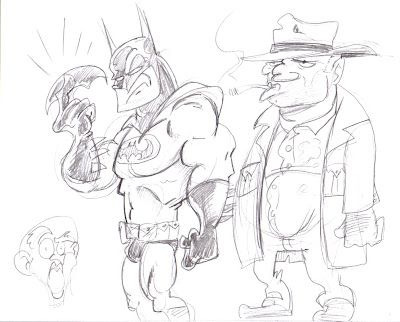 While I was waiting for my slow computer to finish updating my virus checker I decided to do some sketches. I drew that sloppy looking dude on the right and decided that he looked a little like Harvey Bullock from Batman so I drew Batman as well. I like how they turned out. The lines have a lot of motion and life to them. That's something that I've been trying to improve in my work. I want the characters to seem like they are moving even when they are just standing there. I've found that it's important to move very quickly when drawing. The slower you go the stiffer your lines become. You have to have confidence, which is not an easy thing to have when you are your own worst critic. That's why I like to ink my comics in Photoshop. I can move really quickly and if I mess up I just undo the line until it looks right. I think it helps in maintaining those lively lines from the original pencils.
Posted by Jeff M at 12:32 PM No comments: 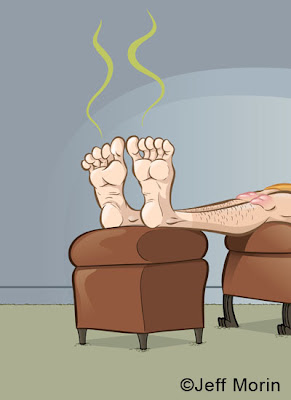 This is the latest illustration I did for istockphoto.com. I've been creating stock illustrations for about a year now. I've heard that the illustration world frowns upon doing stock, but I don't care. It's a really good way for a starving artist to make money on the side while also honing your skills. At first I didn't think it was worth it because I wasn't getting very many downloads. Then I started adding more files and the downloads started to come more frequently. And the cash started rollin' in! Actually, I haven't made that much money on it yet but I seem to get a handful of downloads every month. I've only got 24 files uploaded and I've had 54 downloads, but for the first six months or so I only had 3 or 4 files uploaded. So my download success rate doesn't seem too bad.

Once I'm finished with Chapter two of my comic Rudolph the Hideous Abomination I think I'll work on some illustrations before I start Chapter three. Then once I'm done with the comic I think I am going to spend a few months just working on stock illustrations. I want to turn this into a big chunk of my income if I can. It's the only real for sure thing I have going right now.
Posted by Jeff M at 9:05 AM No comments: 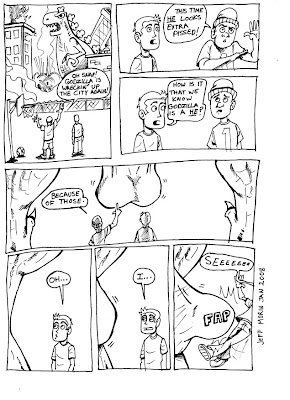 This is a comic that I drew quite a while ago. At the time I had this idea that I would do a series of comics that I drew in my sketchbook while at work and then I'd post them online calling it Tales From The Milk Box. The problem was that every time I drew a comic at work I'd end up not liking the way it looked so I'd want to redraw it. This was the case with my comic Justice League Fan Fiction . Eventually I just scrapped the whole drawing comics in my sketchbook thing mostly because I never had enough time at work to do it anyway.
I still had a lot of random comic ideas floating around in my head, so I decided to draw them all at home like a normal person. But unfortunately none of this really ever panned out because I was always too busy working on bigger and better things. So, here I was stuck sitting on this great Godzilla comic. At one point I decided I should redraw it because I didn't like the artwork anymore and I drew it when I was still getting used to inking things with pen and paper. The problem is who the heck knows if I will ever get around to doing that. I can't just keep this locked away in the Morin vault any more. So here it is world, a comic about Godzilla's balls!
Posted by Jeff M at 9:37 AM No comments:

Family Guy is Afraid of the Retardeds

Last night's family guy saw Chris Griffin dating a girl with Down syndrome. Sound like a recipe for hilarity? Wrong! It seemed as if they were too afraid of offending somebody so the episode was pretty boring over all.
Anyway, this reminded me of a comic I drew documenting a real life interaction I had with a co-worker of mine. This really shouldn't be offensive to anyone after all it really happened to me, only slightly exaggerated for comedic effect.
http://inner-nut.com/D-ville/2009/May/93special.htm
Posted by Jeff M at 5:23 PM No comments:

Hello everyone. It's me Jeff Morin, artist extraordinaire! This is my first post on this blog. Mostly I'm going to use this blog to post art and sketches I have done while plugging my webstie.

Anyway, I thought I'd kick this off with a few doodles I did. I decided that I wanted to draw a new cartoon version of me for the front page of jeffmorinart.com I wanted to do something less flat and more cartoony. The hairy guy on the left there is what I came up with. I'm not sure if it's exactly what I'm going for but it will do for now. The rest of the doodles are just me playing around with goofy facial expressions, and there's a dog face for some reason. Enjoy! 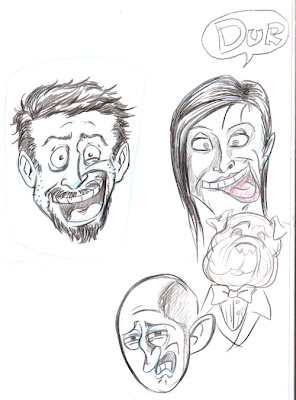