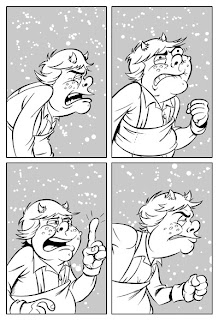 Usually I don't make any New Year's resolutions, unless it's something kind of vague like, make more money with my art. And that's usually something I would be doing no matter what. This year, however,  I've decided to make a real resolution; I'm going to finish all the projects that I've had on the back burner for a while.  I'm going to start one at a time and finish them to completion within the first few months of this year. Then I'm going to start on the projects that I've been meaning to do for a long time and hopefully have those done or going on before 2012 is over.

The first thing I'm going to do is finish inking and lettering Rudolph The Hideous Abomination.  I started working on and posting this comic like two years ago. Then I got pretty busy with freelance work so I wasn't able to work on it quite as much.  After a while, I got so sick of working my day job that I decided I couldn't do any art projects that weren't going to bring me money.  I was really hoping I could start making a living with my art real soon. So I started focusing on doing stock illustrations and designing T-shirts when I wasn't doing freelance work. So, I just didn't have the time to work on Rudolph anymore.

2011 was a good year for freelance work but not so good the stock illustrations.  Around July my sales dropped drastically even though I had uploaded a number of new illustrations. So my money making plans didn't really work out. Because of this, I decided I could no longer put so much stock (no pun  intended) into doing stock illustration.  So, I decided to exploit every source I  could. This year I've started selling products on Zazzle.com, designed souvenir T-shirts to sell locally, entered contests and started a new webcomic, The Daily Doodle.  There's a lot of other things I'd like to start in the coming year, some of which I've had on my mind for a while but I just can't do anything new otherwise I'll feel guilty about the things I haven't finished.  So, I've decided not to be too concerned on whether or not these projects will be lucrative and finally put an end to that nagging guilt!
Posted by Jeff M at 2:52 PM 2 comments: 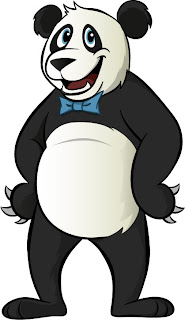 Several months back, I designed this mascot for Surpass Hosting. 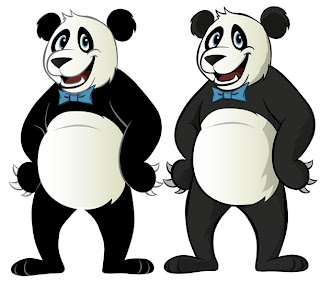 I kept his color scheme pretty basic, keeping him black and white like a real panda and adding a blue tie to go with the site design.  The dark grey one on the right is the first iteration but I wasn't quite happy with it so I did one that was plain black with some lighter contour lines.  I prefer the black one better but I showed both versions to the client just to give them a choice.  They ultimately chose the dark grey one because they felt it matched better with the website. 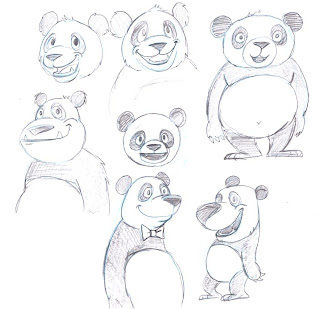 These are some initial sketches that I did, just coming up with different designs.  They preferred the cuter more classic look of the ones on top.  So from there I did some more sketches working out the body shape and other details. 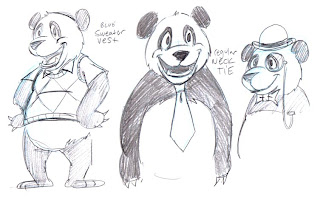 After we got the look of the bear down, I did some more sketches giving him various accessories. In the end we kept it pretty simple, just giving him a blue bow tie.

Many months ago I decided to start selling products on Zazzle.com in one of many attempts to make some extra side money with my artwork. Prior to choosing Zazzle I did some research and looked for reviews on many different print on demand websites.  Unfortunately, at the time, there wasn't many reviews for the quality of the products themselves. I mainly wanted to print T-shirts, so it was important to me that the quality of the shirts would compare to screen printed shirts. Out of the very few reviews, Zazzle seemed to get the best for their T-shirt printing.

For many months now I've been uploading and designing T-shirts and other products but I've been a little weary of promoting them since I hadn't actually seen a physically printed item.  So, about a month ago I decided to go ahead and purchase a Coolthulhu T-shirt for myself. And I've got to say it came out pretty good.  The shirt itself is a 100% cotton Haynes tagless tee.  It's pretty thick too which is good because I was a little worried that they would be like flimsy undershirts. I always upload vector files to ensure the image is as crisp and clean as possible and it definitely came out really crisp when printed on the shirt. Overall I'm extremely pleased with the result. 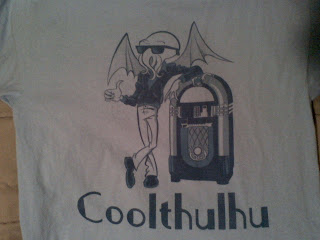 Here is a picture of the printed T-shirt. It's a little dark and grainy because I took it with a cellphone but you get the idea.

In addition to the Coolthulhu shirt, I ordered a morning Power Up mug.  I think mug print on demand technology has been around for a while. Don't they do that in the mall? Regardless the mug is a pretty standard porcelain number and the image comes out pretty clean with all the right colors.  The image appears to be stained right on the surface of the mug too. There's nothing bumping up as if it was another material stuck to the surface. 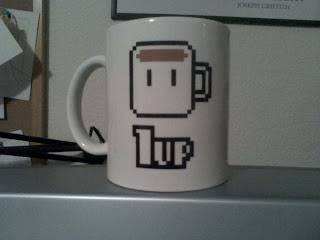 Over all, I am pleased with Zazzle and will continue selling products on their site. If you are interested in giving me some of your money, you can order many of my products right here: http://zazzle.com/jeff_art
Posted by Jeff M at 3:04 PM No comments: 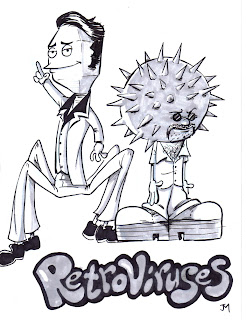 I did this sketch for my friend Alison who is going to school to be a doctor.
Posted by Jeff M at 10:01 PM No comments:

Email ThisBlogThis!Share to TwitterShare to FacebookShare to Pinterest
Labels: Sketch 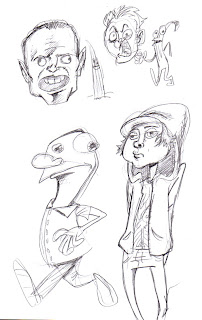 Here's a couple of sketches that I did at work. The kid in he hoodie at top and the girl with the ipod are both based on real life young people that I saw at work. The rest is just crazy nonsense.
Posted by Jeff M at 6:47 PM No comments: