My pal Dylan asked me if I would provide him with some sketches to use as story fuel. So I went through a few of my recent sketchbooks and found four images that I thought would inspire some good short stories. I love this idea. Hopefully we'll be doing it a lot in the future. The stories will eventually be posted on his fiction blog once it's up and running. I'll post a link to it  once it's all done. 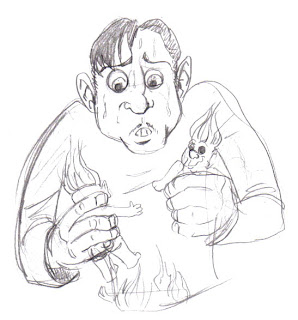 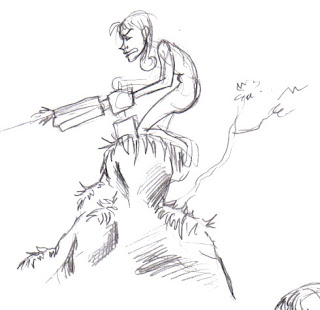 This is another header image I created for my friend Dylan. He's going to be starting a blog site in the near future  (real near, I hope) where he reviews  just about everything that exists. It should be fun.

The final image will actually have a transparent background and the outer space background will be the website background.  That way the header will seamlessly blend with the site design.

I'm pretty pleased with the way it came out. I definitely spent way too much time on it. Mainly looking for the right font to use in the logo. I probably spent the same amount of time looking for the font as I would have just lettering it myself. But I really, really didn't want to do it myself.  I found a good font though. The font is called, Lunch.  I'm not sure who the designer is. They were not credited on the site I downloaded it from.

Update: Dylan's Blog is now up and running. Here's the link.
Posted by Jeff M at 12:00 AM No comments: 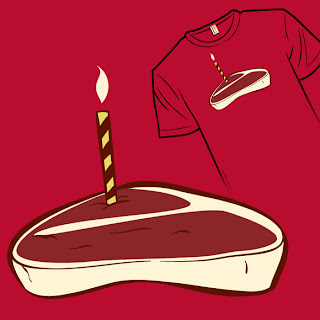 I'm participating in the Woot shirt contest again this week.  This week's theme is "In the kitchen".  I decided to go simple for my design and do a visual interpretation of the term "beef cake".  I'm pretty pleased with it. Hope you like it. You can vote for it right here: http://shirt.woot.com/Derby/Entry.aspx?id=58048
Posted by Jeff M at 2:51 PM No comments: