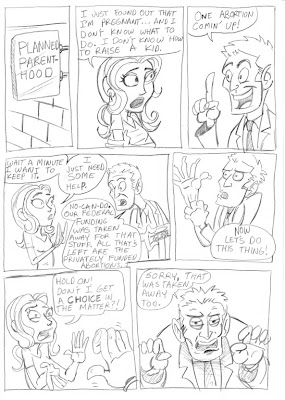 Sketch Of The Week: Internet Speak 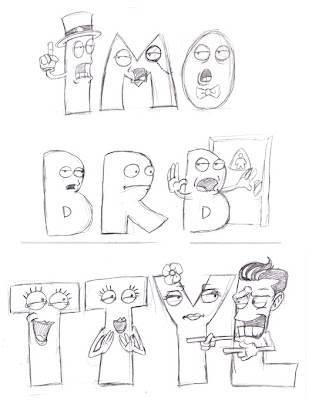 These are some stock art ideas I created back when I first started contributing to Istockphoto. I was going to do a whole series of internet abbreviation characters. I actually completed two of them based on "LOL" and "OMG".

Unfortunatley these were rejected by the Istock inspectors for prominently featuring typography. I disagree with their ruling because they're characters shaped like letters not actually letters themselves. It's just as well though, I have some better ideas on what to do with these illustrations.

Since LOL and OMG were rejected the others never got completed. For now they only exist in sketch form.
Posted by Jeff M at 12:47 PM No comments:

For the past year I've been doing a lot of work for WinTheTrophy.com. They're a free sports betting/social gaming site where users can compete against each other and win virtual trophies. I was originally commissioned to do some promotional comic strips. Shortly thereafter, they launched a service in the Win The Trophy store that allowed users to purchase a custom avatar illustrated by Me. To help promote this service I was tasked with doing caricatures of three famous sports stars. Can you tell who they are? 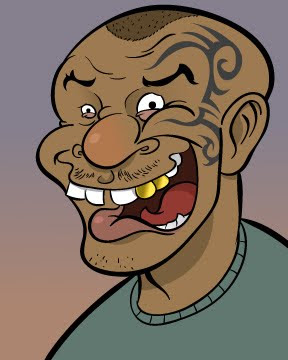 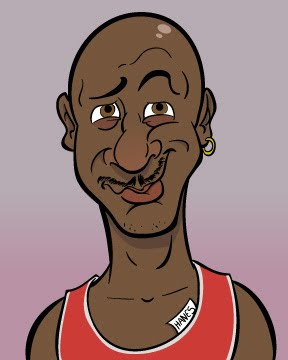 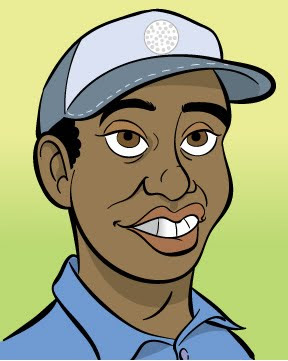 If you guessed Mike Tyson, Michael Jordan and Tiger woods then you, sir or madam, are correct.

Mike Tyson was the easiest to turn into a cartoon character because he's already one in real life. Michael Jordan was a bit tougher but I think he turned out pretty decent in the end. Tiger Woods turned out to be the worst of the bunch, in my opinion. He kind of looks like a rejected Filmation character from the 80's.
Posted by Jeff M at 7:52 PM No comments:

Sketch Of The Week: Captain America 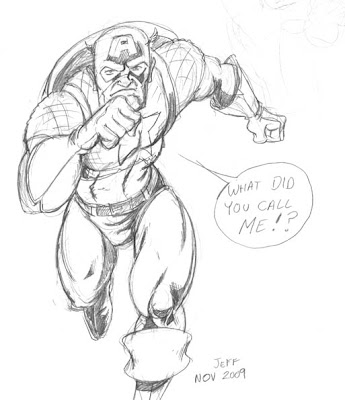 This sketch of Captain America is based on this cover by Salvador Larroca from Wizard 218. 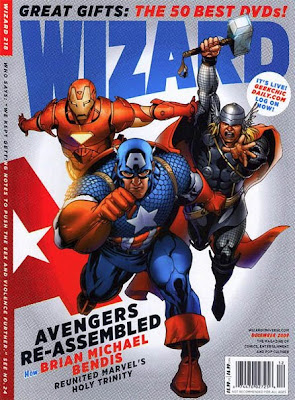 Now, I mean no disrespect to Salvador Larroca. He's a better artist than I am in many ways and deserves his success but this cover is the epitome of what I don't like about modern day comic book art. It's very well rendered and inked and Mr. Larroca knows how to spot his blacks but the characters poses are really wierd and stiff. Just try posing your own body in the same manner as Captain America and you will realize that no one runs that way. It looks like he's ice skating or something. Also I think the attention to detail has caused the pose to become very stiff. Cap is supposed to be running really fast but the line work doesn't really suggest that. There's no real flow to it and it has a very straight line of action.

So anyway, I decided to try producing my own version of Captain America in a similar running pose. I obviously had the ability to see what I didn't like about the cover art so I wanted to see if I could sketch ol' Cap in a similar pose while keeping my criticisms in mind. I decided to exaggerate the proportions a bit more. Exaggerations in a characters proportions and gestures really help sell the idea of movement and life. (Comic artist John Buscema was a master at this. His characters always convey life and movement when there really is none.) I also, modified the running pose so that it was more natural and used a more bent line of action with a slight twist in Cap's waist.

obviously my sketch isn't the greatest drawing of Captain America ever but I think I did a pretty good job of Illustrating him in a more natural appealing way. I recommend that other artist do exercises like this. Look at art that you find unappealing, figure out why you feel that way and then attempt to sketch your own version. It's very helpful in preventing you from making similar mistakes in your own artwork later on down the road.
Posted by Jeff M at 2:28 PM No comments:

Email ThisBlogThis!Share to TwitterShare to FacebookShare to Pinterest
Labels: Captain America, sketch of the week 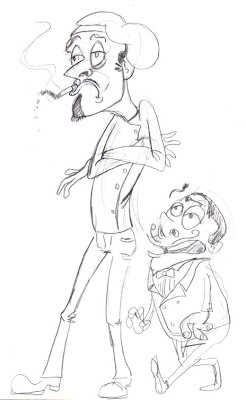 This is the prototype for a brand new character that I've created. He's gourmet chef Gerard Hock Pierre! He's known around the world for his gourmet french cuisine. He enjoys the flavor of coffee and cigarettes and uses them in his cooking as often as possible. When he smokes a cigarette he has the amazing ability to keep the ashes from falling off until he is completely done smoking it. Only somebody as gifted and purely French as Chef Hock Pierre can preform such a feat.

The Chef has quite an interesting origin. He hails from another planet in a far off galaxy. Everything about his home planet is exactly like France and therefore it's known as France Planet. When he was a baby his parents sent him off in a rocket toward earth to save him from the destruction of France Planet.

An Old Man In The Shower

For today's blog entry I'd like to present you with something a little different. Rather than show you a piece of art I've done, I present you with a little piece of inspiration. Something that will inspire us all. That's right! photos of an old man in the shower! 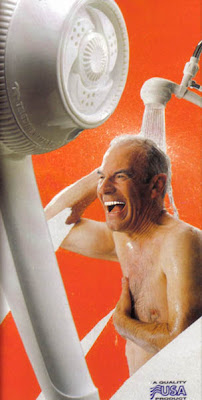 This old guy can't contain his excitement about showering.
Just the mere Idea of soap and water fills him with unbridled enthusiasm. 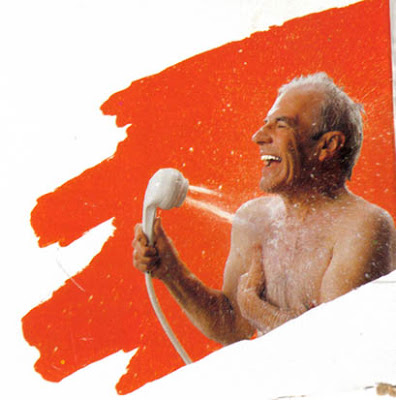 "HA HA HA HEEEE!"
The old man squealed with Joy as he fired a hot stream of water on his locks of graying chest hair.
Long ago when I was just a teenager, my parents had purchased a brand new detachable shower head. These were the pictures on the package. I've saved them all these years hoping to one day share this strange wonder with the world. I can only image what was going through the minds of all the people involved in creating the package art to this box. Sure it's understandable that they would want to make their product look enjoyable but come on, It can't be that good! No old guy is ever going to enjoy showering that much. In fact, old guys don't usually like showering at all.

It's actually somewhat of a hobby of mine collecting strange pictures used on packaging and the like. I've got a couple more I think I might have to share in future posts. Until then, enjoy this gift I have blessed you with.
Posted by Jeff M at 8:26 PM No comments:

Sketch of the Week: When It All Goes Wrong 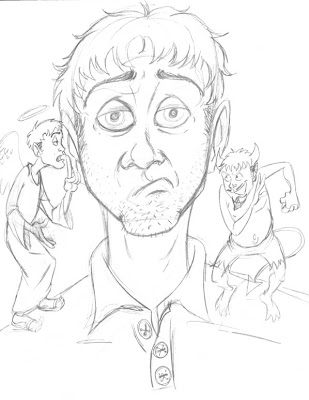 This piece of penciled artwork was originally supposed to be turned into a vector illustration based on the classic shoulder-angel-and-demon concept. Maybe it was poor planning on my part, but everything in this piece went horribly wrong. The original concept was for the characters to be very cartoony like my usual style. Considering that the illustration was very close up I decided to make it more detailed than usual. Unfortunately, the added detail of the main character and his realistic proportions made it so he was more of a cross between cartoony and a more realistic comic book style. Because of the guys awful design the angel and demon came out just as awful because they were supposed to resemble him. On top of that, My attempt to make it look as if they are standing on his shoulders failed miserably and instead they look like they were just place over the top of the image of the guy. Then there's the dudes expression, I'm not sure how this happened, but he's supposed to look like he's making a decision but it just looks like he doesn't really care about anything.

After completing this sketch I scrapped it as a potential illustration. Eventually I'll be taking this concept back to the drawing board for a second try. I'm confident I'll be able to pull it off the second time around, just as long as I don't forget the mistakes I made here.
Posted by Jeff M at 12:48 PM No comments: