Last week I asked my Facebook fans to give me some subjects to draw during my lunch time sketch sessions.  You can check out the first of the sketches here.  So far it's been a lot of fun.

This next sketch was suggested by my girlfriend Rebekah, who is always full of good ideas. She writes,

"I was going to say a butt too.

But, now I think I will say you should draw Seymoure Butts. A man with a large butt who has a company called "Cleaning Butts" and he goes around cleaning cigarette butts off the city streets. But people mistake his company for actual butt cleaning...he is constantly having to explain his business. And pimps get mad at him cuz they think he owns a secret escort service with women who have exceptionally clean Booties. Oh the situations he gets into!

When I say large butt I mean like a Dokes butt from Dexter."

And this is the resulting sketch: 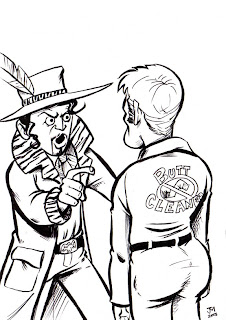 You'll notice that I got the company name wrong on the back of his shirt. That's because I didn't have the comments open while drawing this.

Kurt, an old High School aquaintance, wrote, "You should draw me."

So, I produced the following illustration, which isn't so much a portrait of Kurt but more the image that comes to mind when I think of him. 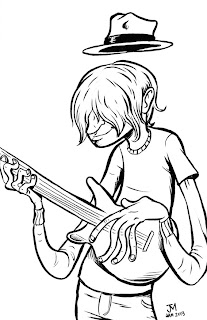 Yesterday, on Facebook and Twitter, I asked people to give me some suggestions for subjects to draw on my lunch breaks. I got quite the response on Facebook.  With suggestions such as a butt, politics, and more butts.  Yes, lot's of butt themed art was suggested. You can read the whole thread here.

Anyway, For the next couple of weeks I will be taking these suggestions, turning them into sketchbook drawings and then posting them here on my blog.

This first drawing is a combination of the first three suggested subjects which were; Something hopeful, a butt and politics. 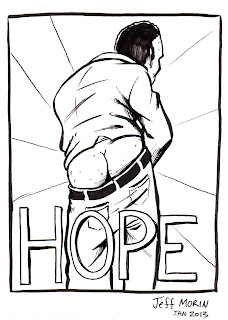 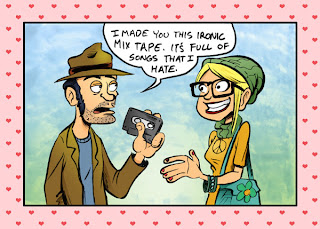 I've added another Daily Doodle Valentine to my Zazzle shop.  It's available as a greeting card with a message on the inside or a postcard.  Zazzle is having a 40% off sale on valentine's cards until Thursday, so now's the time to get one if you want one.  You can see both Valentines that did right here: http://www.zazzle.com/jeff_art/gifts?cg=196980515617696793

I'll probably make one more before the day of Valentine is upon us.
Posted by Jeff M at 7:20 PM No comments: 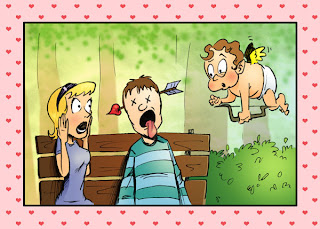 Valentine's Day is getting close, so I've added a brand new valentine's day card to my shop. Like my Christmas cards, I've colorized a Daily Doodle comic.  I'm hoping to do some more before Valentine's Day. I'll get at least one done for sure.  So keep an eye out, and go check out this one which is available as a greeting card or a postcard. http://www.zazzle.com/jeff_art/gifts?cg=196980515617696793
Posted by Jeff M at 2:55 PM No comments: 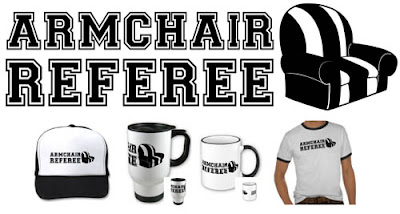 I've got a new line of products over in my Zazzle shop, featuring this design, the Armchair Referee. It's a simple design, yes but I am very happy with the results. So why not get you one or get one as a gift for that sports fan in your life. http://www.zazzle.com/jeff_art/gifts?cg=196445023419043794