Sketch Of The Week: Parakeet Man 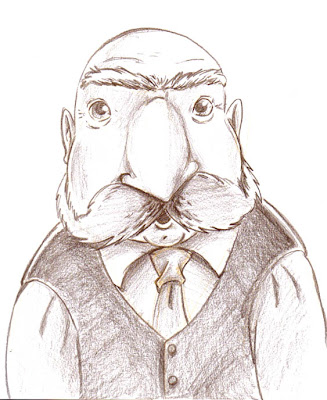 The other day I was thinking about how we, as humans, empathize with animals. We seem to see physical human traits in our pets even when there are very little. For example, I often comment on how my pet parakeet seems to have a dumb or content expression on her face. But, What expression is there? She just has a beak and two eyes that she can close and squint. So I decided to go about visually interpreting the human characteristics I saw in the bird and the Parakeet Man was born. 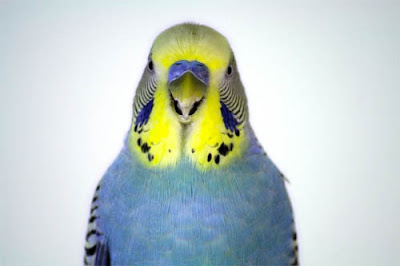 I wonder if birds see bird like characteristics in us. Do we just look like weird shaped birds to them?
Posted by Jeff M at 10:32 AM No comments:

Email ThisBlogThis!Share to TwitterShare to FacebookShare to Pinterest
Labels: parakeet, sketch of the week 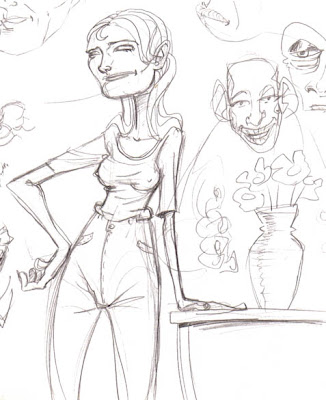 About a year or so ago I was getting really sick of my drawings. I yearned to make my cartooning more lively and creative. So I set out to find a wealth of different influences and to learn some new techniques. This led to me filling my sketchbook with a whole assortment of doodles with the purpose of learning from them and becoming a better cartoonist. If I remember correctly, this was sort of an exercise in drawing the female anatomy and breaking away from the generic attractive female formula. I love how the gesture and facial expression came out and how dorky she looks with her pants hiked up so high.
Posted by Jeff M at 3:17 PM No comments:

Sketch Of The Week: YellowJackets 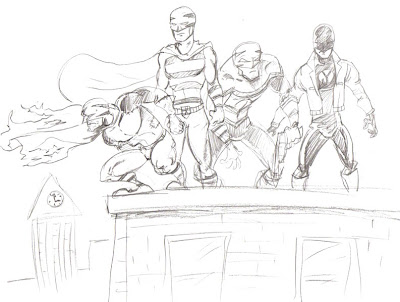 When I was a wee lad, In the fifth grade, I created a superhero that I called The Yellowjacket. Yellowjacket was pretty much a copy of Batman with a little elements of Spider-Man thrown into the mix. I drew quite a number of Yellowjacket comics all the way up until my Sophomore year of High school; each issue full of highly derivative characters and stories.

Despite the fact That Yellowjacket wasn't very original, I still hold the character near and dear to my heart. For fun, I like to imagine that the character has still been having comic book adventures all these years and I'll re-imagine his look and status quo.

The first Yellowjacket in this sketch, ( going from left to right) is actually the second version. I imagined that he had become obsessed with fighting crime and it destroyed his normal life. He became homeless and lived in a clock tower in the city. Of course he had no money to repair his costume when it got damaged so it became a shredded up mess.

Number two was the original. This is the one that was featured in all those comics I drew. When I first designed him back in fifth grade, I remember showing him to my friends and they made fun of the fact that Yellowjacket's bee shaped belt buckle looked like a penis.

The third was more of a daredevil style character. It was after his homeless phase. He sported a modified costume without a cape.

Number four is a concept I came up with a couple years ago. For Fun, I actually drew a sloppy comic that took place after the last one I drew in high school. The comic was kind of a parody of the old ones and was quite comical. In the comic a scientist gives Yellowjacket a Yellow Jacket ( it's more of a wind breaker really) which gives him the ability to fly.
Posted by Jeff M at 12:25 PM No comments: 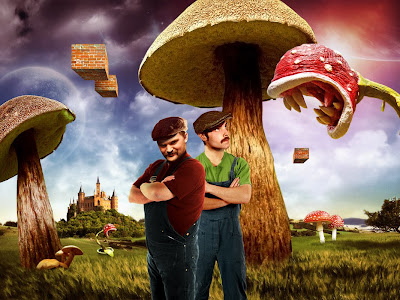 This photo manipulation was born out of my ridiculous obsession with realisitic Mario stuff. I always thought that the ultimate realistic Super Mario Bros. Would be a live action movie that was more faithful to the games than the 1993 flick, which had very little resemblance to the game. In fact, I originally planned on doing this as a fake movie poster but after finding the images I needed online, I decided it would be cooler to show more of the surrounding mushroom kingdom. My approach to the subject matter was still to treat it as if I was the director of a Super Mario movie and re-imagine certain elements so that they were more feasible in a realistic setting; for example, Mario and Luigi don't have their initials printed on their hats.

Below are the 13 photos used in the construction of this image. I've grabbed them from various sources all over the web. I don't have the names of all the photographers/creators of each, but I've credited the ones that I do know.

Except the dude with the hat on the bottom, the bodies and heads of Mario and Luigi are stock photos that I purchased from Istockphoto.
Luigi's head by Brian Dixon
Mario's head byKevin Russ
Mario's body by Mike Sonnenberg
Luigi's body by Tommaso Altamura

This fantastic Pirahna Plant Sculpture was created by Jaime Margary. I recommend checking out his work. He does a whole host of other creepy looking video game related sculptures. 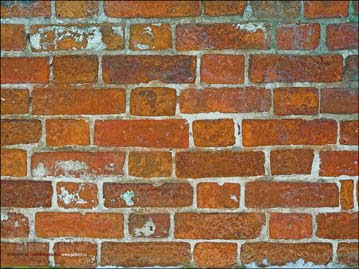 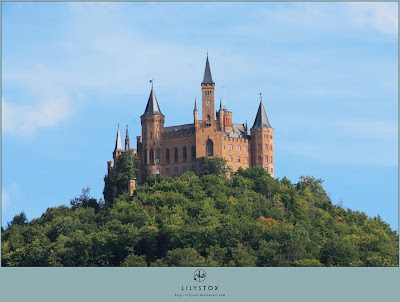 This castle is brought to you by LilyStox on DeviantArt 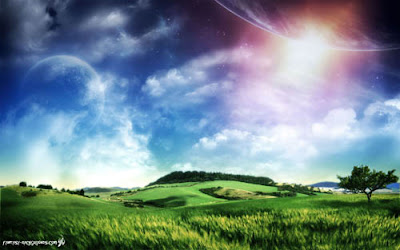 This background looks to be compiled from both photographs and some digital art. I don't know who the artist is but I found it at fantasy-backgrounds.com.

If you enjoy this be sure to check out my Shy Guy picture too.
Posted by Jeff M at 6:32 PM 1 comment: 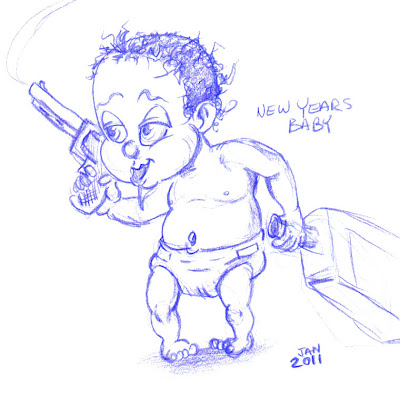 So, the idea behind this sketch was to depict a baby celebrating the new year in the same manner as irresponsible adults, by drinking tons of booze and firing guns into the air. After drawing it I realized there's not much about it that seems like New Years. Instead it's a slightly troubling image of a cute little baby with a revolver and a bottle of hooch. It seems more like some kind of a social commentary about our youth.

So, you might notice that this and my previous Christmas related sketch were done using colored pencil. I'm not sure what it is about sketching with colored pencil, but in my opinion my sketches turn out better and I seem to learn more from them. I haven't quite figured out what it is. It might be the softness of the pencil and the ability to vary the shades more. Also colored pencils don't have that reflective nature like graphite pencils do. Well whatever it may be, I know I'll be doing more sketches with colored pencils. Plus, It's really fun to draw in different colors.
Posted by Jeff M at 1:37 PM No comments:

( Note: Stay up to date with my latest art and comics by following me on Twitter or becoming a fan on Facebook. -Jeff ) 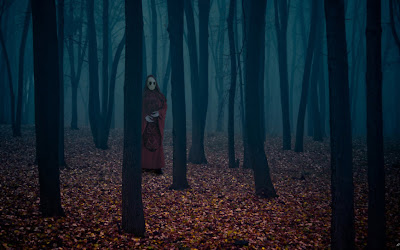 Here it is everyone, a screen-shot of Shy Guy from the upcoming live action Super Mario Bros. Movie. Nah! I'm just messin' with ya. I made this in Photoshop. I kind of have this obsession with the idea of Mario and the Mushroom Kingdom being interpreted realistically. As does the rest of the internet I assume, based on the various realistic paintings and illustrations of the famous plumbers. 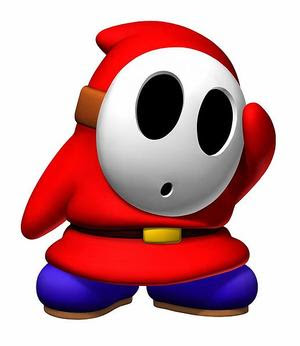 I've actually been working hard on another photo manipulation featuring Mario and Luigi which I hope to post within the week. Before I started on the Mario and Luigi one, I had the idea to do one of Shy Guy. I figured it would be relatively easy to find the photo components online, and it was. It was also sort of a good way for me to warm up my Photoshop skills in preparation for Mario and Luigi. 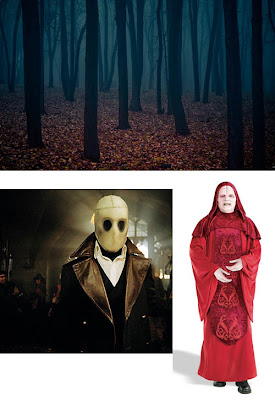 I guess inspiration hit me when I remembered seeing that creepy mask in the Franklyn movie trailer and realizing that it looked a bit like the Shy Guy mask. From their it was only a matter of finding a photo of somebody wearing a hooded robe which would be an easy task considering the popularity of Star Wars. Sure enough I found a photo of an emperor palatine costume that just so happened to be red. I envisioned the image with Shy Guy lurking around a creepy forest, so I found the perfect picture brought to you by Five-G on deviant art.

So there you have it, folks. A realistic, creepy looking Shy Guy. Stay tuned for more Mario madness.
Posted by Jeff M at 8:04 PM No comments: 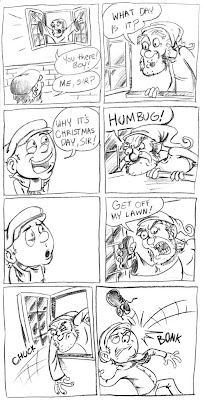 Sketch Of The Week: Nice Is Nice 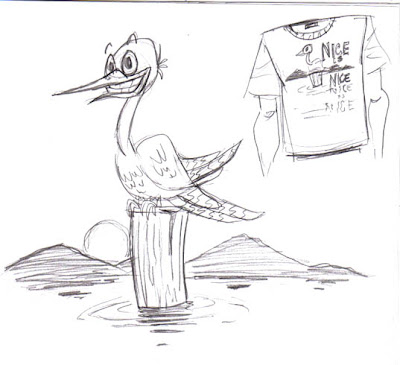 Around spring, summer, and fall here in the County of Lake there's a ton of street festivals in all the small towns. Vendors from all around come to rent spaces and sell there wares made in the orient. This year I'd like to be one of these street vendors and peddle some T-shirts adorned with my own designs. Along with some existing designs, I'd like to create and sell some new ones based around the surrounding towns. This concept sketch is based on my home town of Nice (pronounced "Niece"). Nice is stationed on the shores of Clear Lake where there is an indigenous population of Heron birds like this. I'd also like to have the shirt say "Nice is nice", with the words reflecting in the lake. So what do you think, If you are a local or somebody who might be visiting, would you buy this shirt?
Posted by Jeff M at 11:44 AM No comments: