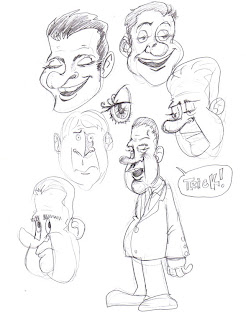 Now that I have Netflix I watch a lot of documentaries.  It seems like, in most of them, they will mention something horrible that Richard Nixon did. In one documentary they showed a clip of him on stage with his wife, after winning the election and he was moving his head back and forth waving at the crowd while fluttering his long eyelashes. It was totally weird, like some kind of super villain trying to pretend to be kind and innocent. Needless to say, I was mesmerized by the fluttering of his long eyelashes. I always thought he looked and acted like a real life cartoon but in that moment he reminded me of a celebrity caricature in one of those old Warner Brothers cartoons.
Posted by Jeff M at 12:45 PM No comments: 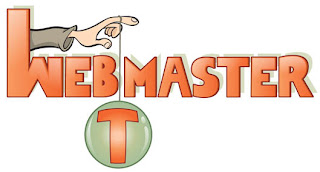 This is another Logo I did for the folks at ProInternet Television.  It's for their sister site WebmasterT.com . The color scheme for the final version was changed to red and grey for the website. I think I'm more partial to the pale green and orange though. 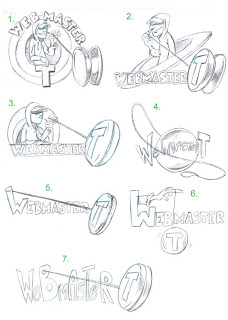 These are the concept sketches. The original suggestion was to put the main character, Webmaster T in a Loony Tunes style circle and have him throwing the yo-yo foward so that it is coming at the camera. I tried out several different versions of this but also threw in some of  my own ideas, and they ended up picking one of mine. This is one of those designs that could have gone in a number of different directions. I'm sure I had like eight more ideas in me, but these were the best.
Posted by Jeff M at 8:00 AM No comments:

Email ThisBlogThis!Share to TwitterShare to FacebookShare to Pinterest
Labels: logo

This is a logo that I designed for the website/company ProInternet Television. It's now live on their website and it's also featured quite a bit in this video. This was a fun one to design. Below are some initial concept sketches. The client wanted something featuring a sort of retro TV design. They ended up liking the first one the best but they had also mentioned liking the combination of the TV and Computer in number 5. So I came up with the idea of adding a keyboard to the design and they were pleased. 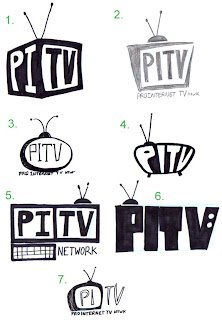