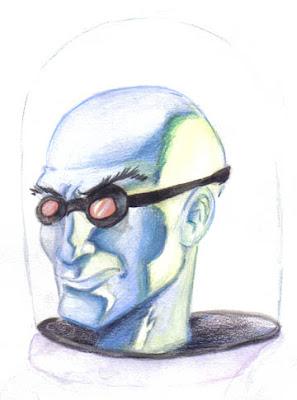 Usually, I work in a mostly digital cartoon style but sometimes I like to venture off into slightly unfamiliar realms. I'm a big fan of old movie posters and pulp illustrations and have wanted to try my hand at creating my own. I'm definitely not as skilled with a brush as I am with the pencil, so I've been experimenting with a mix of water color and colored pencil to create a similar look.

I use water color as my base color and then after it dries I tighten everything up and add details with colored pencil. I think I might be on to something here. I've still got some more experimentation to do though. I think I need to apply more detail with the water color before moving on to the pencils to avoid having too much of that pencil texture.

One issue I'm having with doing pieces completely non-digital is getting them properly scanned or photographed. My scanner seems to wash out a lot of the color and subtle detail. It might be time for me to invest in a better scanner.
Posted by Jeff M at 11:34 AM No comments:

Email ThisBlogThis!Share to TwitterShare to FacebookShare to Pinterest
Labels: Batman, mr. freeze, sketch of the week

Cook With Nick And Cinnamon

My long time friend Nick is a jack of all trades but master of none. One of those trades that he's not a master of is cooking. He loves to cook and learn about preparing food. Long ago he started a website, CookWithNick.com. I'm not really sure if the website is a serious cooking and recipe site or more of a hobby thing. I guess it's a little of both. It depends on what mood Nick is in. I suppose for him it's a serious hobby. 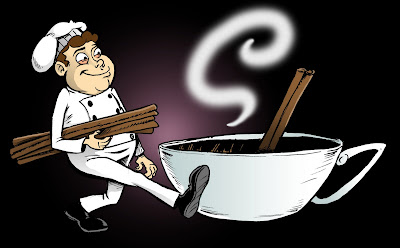 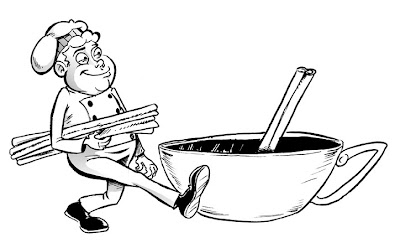 Every now and then I do a little Chef Nick illustration for the site. Since there's no payment involved I usually take the opportunity to do something different. This time I decided to practice my traditional inking. This is something I would like to get better at. I prefer digital inks for the most part because you can do it very quickly and it's easy to undo a mistake. But the old fashioned way has its advantages too. The ability to move my paper around is one. The ease of doing small flicks when doing cross hatching is another. Plus, having a clean finished ink drawing in the physical world is a lot more satisfying than having a digital file.
Posted by Jeff M at 6:18 PM No comments:

Sketch Of The Week: Gusthave 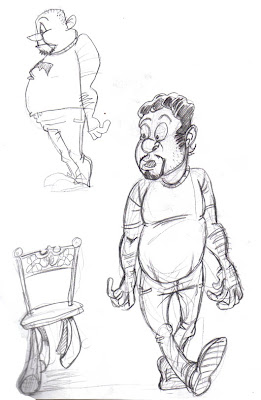 Nothing too fantastic this week. I've just got something a bit strange from a while ago.

At some point my pal Dylan Duarte had this idea for a short story starring a man named Gusthave (pronounced "Gust-Have") and a talking chair. It was a strange story but quite interesting and funny. Dylan imagined Gusthave looking like Danny Mcbride in Eastbound and Down and so that's how I drew him.
Posted by Jeff M at 12:58 PM No comments: 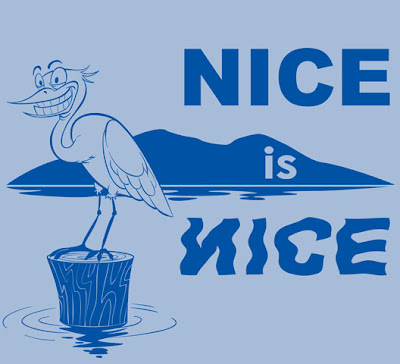 You might remember, a couple of months ago I posted a Sketch Of The Week that featured my concept sketch for this very T-shirt design.

Originally my plan was to pay my friend Nick to print this shirt so I could sell a bunch locally at street festivals around my home town of Nice (pronounced "niece" despite it's spelling.) The plans have changed somewhat since Nick has decided to get back into the the t-shirt printing and selling business. He used to just sell various novelty tees on the internet but this time around he decided to steal my idea and start selling souvenir shirts locally. Rather than being angry at the fact that he took my idea, I'm happy about it. This is what I wanted all along. Now I don't have to worry about losing any money I invest in unsold T-shirts. I'll just collect a royalty on every shirt Nick sells that bears my design. Also, Nick is selling the shirts to local businesses thus increasing our potential clientele. Hopefully, come tourist season we will sell the heck out of these shirts and make it worth our while.
Posted by Jeff M at 6:37 PM No comments:

Email ThisBlogThis!Share to TwitterShare to FacebookShare to Pinterest
Labels: t-shirt

Sketch Of The Week: Old Man 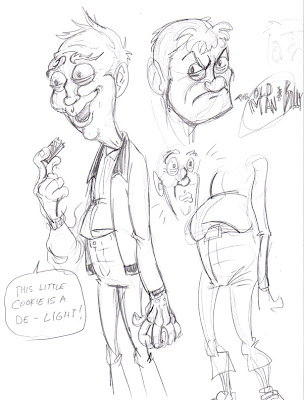 Back when I was still doing Disappointmentville USA I did a comic called, Worst Fear which featured the future version of the Jeff character (based on myself) and Billy his younger coworker. For whatever reason I loved these characters more than any other character that Dylan and I had created for the comic. So, soon after Worst Fear I did three more comics featuring Old Man Jeff and Billy.

Eventually, Dylan and I decided to end Disappointmentville but I still had the need to do more with the Old Man Jeff and Billy characters. This led to the birth of a new idea, Old Man Jeff and Billy: Buddy Cops. I would take the duo out of the Disappointmentville universe and place them into a new one where they were partners working on the police force. I wrote several pages for this comic, in my usual way of writing. (extremely rough thumbnail sketches of each page with dialog written on it.) but this idea got filed away as began working on other projects.

Recently, while cleaning out the drawers of my drawing table I rediscovered the Buddy Cops idea. I found that I still very much like the idea and a lot of it was pretty funny, or at least I think so. The only issue was that I really have no interest in doing characters directly based on myself and my friends anymore. I'd rather create new characters inspired by life but not based on anyone directly. So I decided that if I make this into a comic I would re-work Old Man Jeff into Old-Man-Somebody-Else which isn't really all that challenging. I'm sure the characters need updating anyway as I've evolved my style somewhat. And so, this sketch is a prototype of the new Old Man character.

All the Old Man Jeff and Billy comics:
Worst Fear
Old Man Jeff
Cheesy Jokes
Not How We Imagined part 1
Posted by Jeff M at 12:34 PM No comments:

It's time for another hastily drawn comic starring everyone's favorite news maker, Charlie Sheen! You better read it fast because in about 15 minutes nobody will remember or care what this is about.

Sketch Of The Week: Shop Lifters

Jeff Morin Police Sketch Artist... Nah! That sounds like a boring job. Although it would probably be better than my current day job and I do like to use my artwork to bust criminals.

As some of you may already know, I work at a grocery store by day wasting my talents stocking cheese and ordering milk. One day I was lingering in the back room by the double doors, sighing and complaining when, through the door's window, I noticed a couple of guys on the liquor isle up to no good. The fellow on the right (we'll call him Righty) shoves this huge bottle of vodka in his pants. He and his friend (Lefty) began to walk very quickly toward the front of the store. I was having none of this and went into full on Batman mode, following them and matching their speed. They both split up and Righty made his way past the cash registers while Lefty escaped out the front door. I stepped in front of Righty and asked "Where are you going?" trying to hide the nervous squeak in my voice. I calmly asked him to give me the bottle back and he tried to act as if he didn't know what I was talking about, to which I replied "Bullshit, I saw you shove that bottle down your pants." He still wasn't budging but he wasn't trying to leave, so he knew he was caught. Being that I was all alone and my fellow employee's weren't paying any attention to this confrontation I was engaged in, I decided that it would be easier for me to recover the merchandise rather than detain the suspect. So I offered him a deal, If he gave me the bottle I wouldn't call the police. And what do you know it worked. I rescued the $60.00 bottle of hooch.

I felt like a bit of a hero until later when my bosses reviewed the security footage and found out that Lefty had taken a bottle too. Also, one of the employee's saw them leaving and said that they were yuckin' it up as they tore ass out of the parking lot. Needless to say I was not too happy about that. If only I had a cool car and scary costume like Batman, then I'd track them down and teach them a thing or two about the importance of justice.

Later on I used my excellent artist's memory and some screen caps from the security footage to create these accurate sketches of the two douche bags. I hung it up in the break room for other employees, just in case they ever returned but they never did. Probably because they were too terrified of encountering the Milk-Man again. (Cue Danny Elfman's Batman score)
Posted by Jeff M at 7:57 PM No comments:

Email ThisBlogThis!Share to TwitterShare to FacebookShare to Pinterest
Labels: shop lifters, sketch of the week

Ladies and gentlemen, I present to you one of the greatest magazine covers of all time... 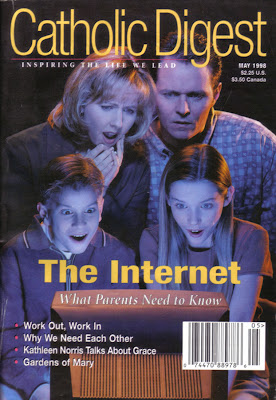 I've had this magazine in my possession for years simply because of this hilarious cover photo by Mowers Photography.

These children have obviously discovered some top notch internet pornography and boy are they excited about it. There parents don't seem to overly concerned with stopping their children from seeing the full penetration happening on screen though. No, instead they are mesmerized by what they are seeing. Mom is shocked and a little scared, but in a good way. Dad is not really shocked, scared, or even disgusted. He seems pretty into it. It's obvious because of the expression on his face, that he is memorizing that URL for later.

I wonder what the Pope thinks of this.
Posted by Jeff M at 7:21 PM No comments: