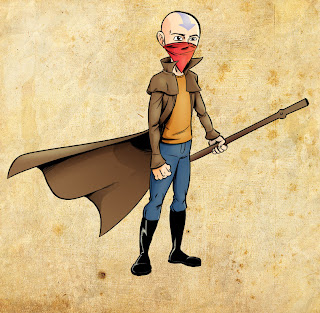 Over a month ago, I asked my Facebook followers to make some requests. I asked them to suggest any fictional character put their own spin on it if they wanted, and I would draw it.  I was able to complete one before getting very busy.  I'm still fairly busy right now but I will do them when ever I have some extra time.

This suggestion comes from Elaine, who suggested that I illustrate Ang from Avatar: The Last Airbender as a member of the Firefly crew. This was a fun one.

I figured if Ang lived in the Firefly world then his clothing would consist of a mix of the old west and modern day styles, like the rest of the characters. I thought it would be cool for him to wear a duster because it would flow in the wind when he's bending air. Plus, the top of the duster kind of resembles his robe from The Last Airbender cartoon.  I also gave him a bandanna that he could wear around his face, like a bandit. My thoughts were that the planets in Firefly were usually pretty baron and dusty so he'd need to protect his mouth and nose while using his powers, as it would kick up a lot of dust.  The rest of his costume is more modern. It's basically just  jeans and a t-shirt with boots, much like the other members of the Serenity crew.

I decided to take some time and color this one in Photoshop. I've been feeling like I need to improve my Photoshop coloring skills a bit. Of course, I've done coloring in Photoshop plenty of times but it feels like I do it differently every time  Sometimes I have to figure out a good formula or the right tools to use again. So, I'm hoping if I spend some time and use the suggestions as practice I can develop a good formula for my coloring process and stick to it every time.
Posted by Jeff M at 3:08 PM